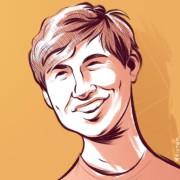 Patrick is such a simple, fun character to animate. I had the chance to get away from the rigging system for a bit and throw down on some animation for a change. The challenge with a character like Patrick is pushing the contrast between poses without loosing the audience’s eye in the transitions.

I used a few simple tricks to make that happen here. The fist thing I wanted to make sure of was, that each pose was different than the pose before it and held it’s own personality element. I tried to pick a word to describe each main pose.

The poses in this shot go:

I wanted to try to capture as many of the funny elements of Dwight’s personality in this simple animation if I could. And this audio allows me to really cycle through those and push them a bit. Being that Patrick is basically a line with a face, choosing graphic representations, straight lines or curves, really helped me find some poses I could run with.

I also wanted to play with the idea that the character floats in space. There is nothing to ground him down. This can be a blessing and a curse I suppose. But, it allowed me to play with how the head and the audio interacted. I was able to use the open mouth poses in the audio to stretch the face into another pose. That kind of thing is always enjoyable in animation. I feel like anytime I can connect the lip-sync with the overall animation, I get something much more interesting in the end.

Well, that is probably enough blabbering from me. I hope you guys enjoyed the animation and that this rambling is helpful when you sit down to do your next animation. If you want to hear more about my animation process or if you’d like to see me break down animation further, let us know in the comments!

You can now grab Patrick and the rest of the Long Winter crew for just $10/month!